Its the history of german shepherd breed that’s why i Love German Shepherd Dogs.The German Shepherd dog originates from Germany, as the name suggests! The breed’s origins consist of a combination of the old Germanic farm dogs and herding breeds that were native to the country at the time, and the breed as we know it today was first introduced to the world in 1899, when breeder Max Von Stephanitz showed his first specimens. The breed was specifically developed to have superior instincts for guarding and herding, and later, personal and property protection and tracking.The German Shepherd is popular across the world, and can commonly be seen in working roles including alongside of the police and military, and in some areas, as farming and livestock guarding dogs. 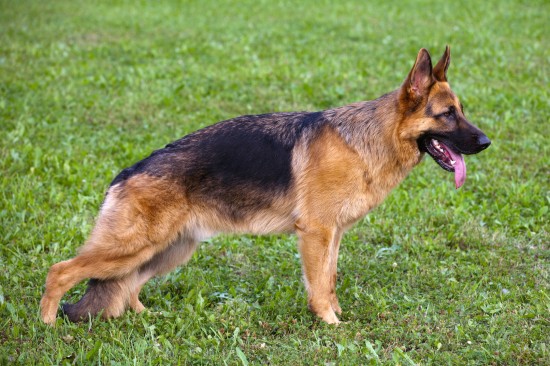 As cuddly as a teddy bear to those that care for them and cold as ice to those that don’t, German shepherds love friends, fun and food. They’re not too fond of lazy days, and they definitely don’t like knocks on the door. But they’re eager to please and even more eager to see what’s hiding in the bushes.

The German Shepherd is classed as a large breed dog, weighing up to 90lb for males and standing up to around 25” tall at the shoulder. They should be muscular but not fat, agile, and have a longer body length than their height. They generally have medium length coats, although long-coated varieties can also be seen, and their fur is thick and double-layered. Breed standards accept a German Shepherd in the traditional black and tan, all black, and a variety of other shades, although white German Shepherds, while often in great demand, do not meet the breed standard.

The average lifespan of the German Shepherd is 12-13 years, and the breed as a whole tends to be robust and healthy.

German shepherds need a way to burn off some energy, because they have a lot. They demand daily walks and playtime. If they’re not properly exercised, they’ll often respond by being destructive, barking, runningaround wildly inside the house and generally acting out. I Love German Shepherd because they are energetic .
Fact : They are incredibly smart and learn simple tasks after only five repetitions. They obey the first given command 95% of the time.

German shepherds love their owners and owners Love german shepherds, but are not so fond of strangers. Properly trained and socialized shepherds aren’t aggressive with strangers, but they make it known that they don’t want someone they’re not familiar with to cross into their territory. But if you train them well they will became friend to your friends.
Fact : They are hugely popular. In fact, the 2nd most popular in the USA behind only the labrador!

A German shepherd isn’t one to stay away from something because he’s not sure what it is. They love exploring their surroundings, often checking out a yard’s boundary when they go outside each day. Their curiosity is especially noticeable when they’re puppies, getting into everything they can get their paws and nose on.
Fact : The average life expectancy of a German Shepherd is 10.95 years.

In addition to being a bit standoffish with strangers, shepherds belt out a vicious-sounding bark when anyone knocks on your door. And they won’t hesitate to protect the ones who love them if danger would arise. They’re especially – and sometimes to a fault – protective of children.
Fact : A German Shepherd’s bite has 238 pounds of force — a human’s bite has just 86!

Synonymous with intelligence, German shepherds were ranked third when more than 200 AKC judges rated over 100 breeds on their intelligence. They’re easy to train, learning many simple commands in as little as five repetitions.

Out of 100 popular dog breeds, studies have shown that German Shepherds are the 3rd most intelligent.

German shepherds can nearly instantly break into top speed, come to a sudden stop and round a sharp corner without stumbling over themselves or their surroundings. It’s one of the many reasons they’re often used as a police and militarydog. Puppies are considerably less graceful, because of their lengthy limbs they can’t quite handle.
Fact : When formal guide dog training began in Switzerland in the 1920s, all of the dogs trained were German Shepherds.

A mix of beige and black is the most common color type for German shepherds, but solid black and solid white shepherds also exist. If you ever plan to show your pup, the American Kennel Club notes that white shepherds are disqualified.
Fact : Some amazing German Shepherds have very unusual colouring. They are known as “Panda Shepherds!

Although many German shepherds remain somewhat thin through the first two years of their life, they quickly fill out afterward. They’re large and powerful dogs, ranging from 22 to 26 inches and usually between 50 to 90 pounds, with females on the lower end of the spectrum. If they’re not properly trained, they can easily pull an adult to the ground if they run after something.
Fact : They are also commonly known as ‘Alsations’. This is because the ‘German’ element was dropped in Europe after World War 1 due to the poor perception of the country at the time.

German shepherds are prolific shedders. Brush one for 15 minutes and you’ll see hair floating in the air again 15 minutes later. Daily brushing is the only way to prevent a buildup of hair in your house.
Fact : Strongheart’ is one of only two German Shepherd dogs to grace the Hollywood Walk of Fame with a star. “Strong heart” was something of a celebrity, appearing in a variety of black-and-white films in the 1920’s.

German shepherd dog breed is now the 3rd most popular breed in the world. They have the courage to stand against any big problem or situation. They are the most intelligent dogs over the glove. German shepherd is also called as police or army dog because in various countries bomb squads uses Germany shepherds . If you are planning to buy a German shepherd go ahead friend do not miss it.

No votes so far! Be the first to rate this post.

We are sorry that this post was not useful for you!

Verified User
Founder of 90Billion. Blogging is one of my favourite hobbies. I love to write and design. Building websites since 2008.
Writer | Lyricist | Blogger | SEO Expert | Web designer |

3 thoughts on “Reasons Why i love German Shepherd Dog Breed.”